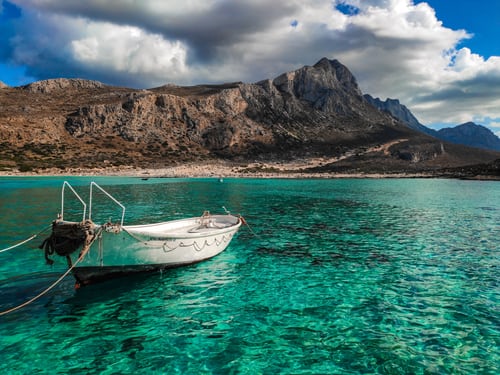 Crete is the largest island in Greece, and one of the most popular destinations as it combines beautiful nature, culture and charming people
Discover beautiful beaches, stunning landscapes and the exotic nature of the Chrissi island.
If you are an adventurous person then we recommend to visit the Samaria Gorge and if you are interested in archeology then visit the Minoan archeological sites
Do not miss the chance to enjoy the local cuisine, the traditional drink “raki” and the cretan music.

The city of Chania or Hania (stress on the last syllable), identified with the ancient city of Kydonia, is the capital city of the Prefecture of Chania. Chania Prefecture, Crete’s westernmost district, is occupied by the “Lefka Ore” (White Mountains), a mountain complex with very interesting formations like the Samaria Gorge.

Very famous for its ecological importance, including the wild long-horned Cretan goat called the kri kri, the Samaria Gorge attracts thousands of visitors every year. Undaunted by the long trip to the top of the gorge (about 42 kilometers/ 26 miles from Chania), and thrilled with the 18-kilometer / 11 mile descent and trek through the gorge itself, those who appreciate nature walks will not be disappointed with the dramatic scenery. It is truly one of the greatest natural ecological sites of Europe.

On the northern coast is the Port of Souda, the largest natural port of Crete.

Whatever you have heard of Crete comes true to its extreme when we speak of Rethymno Prefecture, where words reach their limits and the beauty can only be experienced. Scenic beauty, as well as a distinct local culture, are so inviting to everyone that this region is a magnetic pole of attraction year round! Snow-capped mountain peaks, deep and narrow gorges, fertile valleys watered by the sweat of the people of Rethymno, endless golden sand beaches and the ever-changing colors of the sea contribute to a rich and relaxing surrounding, ideal for memorable vacations.

Remains of the past, which testify to the glorious history of this land through time, an intrinsically hospitable and fun-loving people, a perfect tourist network, and a very beautiful capital city (Rethymno) define the character of this part of Crete. Despite the long incoming tourism tradition of Rethymno, and despite the fact that a great number of visitors decide to, yet another time, revisit the area, there is always a new surprise round the corner, yet another hidden secret for you to discover; fascinating and thrilling, breathtaking and enticing, or relaxing and educational, Crete in general, and Rethymno in particular, are a must for the contemporary world traveler.

Heraklion Prefecture is the largest of the four prefectures of Crete and is bounded to the Prefectures of Lassithi to the east and Rethymno to the west. It covers an area of 2,641 sq. kilometers (1,017 sq. miles) and is inhabited by some 300,000 people.

The capital city of Heraklion Prefecture is Heraklion City, Crete’s largest city and port. The soil is rich in the valleys of the central and northern parts of the prefecture; otherwise it is mountainous, with the mountains of Idi and Asterousia occupying its southern part and coast. Matala beach is the most well known of the few beaches on the south. The north coast, nevertheless, is lined with fantastic beaches, visited by thousands of people. Off the north coast, Ida islet is part of the prefecture.

The prefecture has a Mediterranean climate which can become rather hot in midsummer. The mountains, though, have much cooler weather during the summer, with winter temperatures dropping around the freezing point, and with eventual snowfall.

The main agricultural products of Heraklion are olives and olive oil, vegetables, tomatoes and wine. Peza Valley produces 70% of the wine production of the whole of Crete, which in turn is 20% of the total Greek wine production.

In Heraklion Prefecture, there are important archaeological sites to visit, among them being the three of the four Minoan Palaces found on Crete: Knossos, Phaestos and Malia.

The Prefecture of Lassithi lies at the easternmost end of the Crete, home to Agios Nikolaos, the resort of Elounda, and the island of Spinalonga. It covers an area of 1,818 sq km, and its population numbers around 72,000 inhabitants. The general impression is the same as in the rest of Crete – long sandy beaches, green valleys with small villages, and islets here and there in the crystal-clear waters.

The capital of the prefecture is Agios Nikolaos. It is inhabited by around ten thousand people and is built, town and port, in the picturesque Mirabello Bay. This friendly harbor is no different than any other small-sized one in Crete. Both cosmopolitan and traditional, it gives shelter to both luxury yachts and fishing boats of the local fishermen bringing in the catch of the day. Traditional cafes, along with more modern cafeterias and all kinds of small shops are welcoming the visitor and the local people alike, creating a relaxed rhythm of life! An acceptable level of services to both the non-demanding visitor and the demanding one, the hospitable people, and the local traditions merge to form the all-Cretan atmosphere of this town.

The Port of Siteia to the east, the cosmopolitan Elounda, with its high level tourist infrastructure, and the town of Ierapetra, southeast at the narrowest point of the island, are also welcoming you. The beautiful plateau of Lassithi, ornated by its many villages and hundreds of windmills, relics of a not so remote past, when Man and Nature coexisted in much more reverent terms, and the famous palm-tree forest in Vai, are some of the beauties that the prefecture of Lassithi has to offer.

Lassithi Prefecture, like everywhere else on Crete, has been gifted with many remarkable Archaeological and Cultural Treasures, a result of Man’s existence here since prehistoric times. The long Cretan History has bequeathed Lassithi with many ancient, medieval, and more modern relics. Venetian and Turkish monuments add to the uniqueness of the place – Greek Orthodox monasteries, Ottoman mosques, Byzantine churches, Venetian castles, and clock towers are to be found everywhere. The ancient Minoan Palace in Zakros is worth a visit on its own.

Book a tour or ask us to organise a tour based on the sites and areas you wish to visit, in Crete.